Hamilton and Norwood developed a scale for male hair loss (developed by Hamilton in the 1950’s then updated by Norwood in the 1970’s), in 1977 Ludwig developed a similar scale for female pattern baldness.

Although there are other scales for both MPHL and female pattern hair loss (FPHL), these two are the most popular among practitioners and researchers when attempting to classify hair loss.

The Hamilton-Norwood scale: The Hamilton-Norwood scale (see below) has seven types of classifications and several stages within those classifications. For example, within stage 5 there are three levels of progression including 5, 5A, and 5V, which show variations on a receding hairline with hair loss also in the crown of a man’s head. Androgenetic alopecia, or Male Pattern Hair Loss (MPHL), can begin for some men even in their teens and continue on throughout their life. The rate and onset of androgenetic alopecia is highly individualized. However, it is widely accepted that there are genetic determinants for hair loss and the best indicator of a man’s potential for hair loss is in his family history. 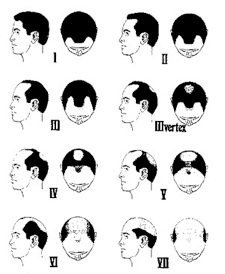 The Ludwig scale: The Ludwig scale (see bottom image) has three primary classifications that display thinning hair, diffuse hair loss, as well as frontal hairline recession. Each image in the scale displays a woman’s head with her hair parted down the middle. As an example, images I-1 through I-4 show the progression as a woman goes from no hair loss to increasingly thinning hair as indicated by a widening part. Further along in the scale, the hair loss becomes increasingly drastic.

In treating hair loss in men & women, as compared to hair loss in men, androgenetic alopecia in women – female pattern hair loss (FPHL) – is not as widely expected nor is it generally accepted in a societal setting. Thus, women suffering from androgenetic alopecia can experience extreme emotional and psychological distress over their condition. Unlike men, women cannot shave their heads.

The Ludwig scale of female pattern thinning helps to quantify the condition and provides a point from which to discuss treatment with professionals in the field of hair restoration, dermatology, and related modalities. 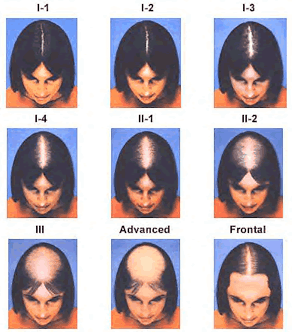 The same process of miniaturization of hair follicles and development of terminal follicles is present for both male and female pattern hair loss. Many, but not all, treatment options are comparable for men and women including medications that contain androgen enhancers, hair replacement accessories, and surgical options. Though there are similarities between male pattern hair loss and female androgenic alopecia, the primary differences are that women tend toward early detection and thus early treatment.

Research continues to be performed on both male and female and androgenic alopecia. For now, the best way to combat it is through early detection. Laser hair therapy is an excellent treatment option. Treatment options are more effective and available when you begin early.

If you or a loved one are experiencing the devastating effects of hair loss and would like to learn more about the latest advancement is hair loss treatment and hair transplants for men and women, we invite you to consider scheduling a free private, one-on-one, no-obligation consultation with us so that we can get to know you and your specific needs and help you create a plan of action to help you restore your hair and achieve your goals.